Serving the Community Since 1918 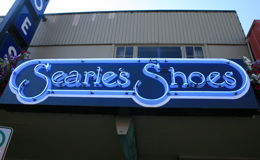 The business began in 1918 with Jas E. Aston who for some time had been running a shoe repair on the premises and decided to bring in a small stock of shoes. 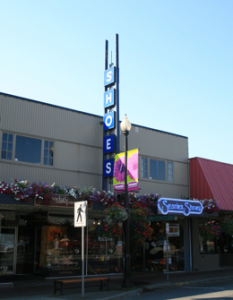 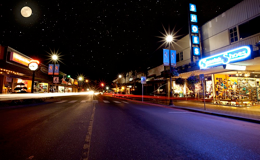 An addition to that partnership occured in 1955 when Mr. A.M. Freddy Pisto joined as a partner. In 1963 Mr. Welsh retired followed by Mr. Williams in 1966. At that time Mr. R Neil Woodrow and Mr. Larry Holmes joined as partners with Mr. Pisto, until Mr. Pisto sold the business to Mr. Woodrow in 1973. Mr. Woodrow retire from the shoe business in 1993. 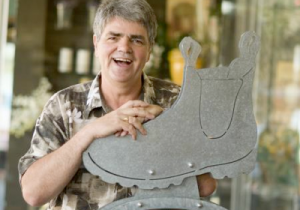 n the Legacy of Searle’s Shoes was Mr. L. Derek Newnes and Mrs. Cathy Newnes. After a long successful career with Woodward’s Department Stores as a buyer of Shoes and Accessories, Mr. Newnes and Mrs. Newnes purchased the business from Mr. Woodrow.

Proud to Serve the Comox Valley for over 80 Years!

Starting on June 2nd, Searle's will be open from 9:30am to 5:30pm, Tuesday through Saturday.

We are offering front door pick up, free delivery in the Comox Valley or shipping to other destinations.

View and shop online here at searlesshoes.com. Orders accepted by phone or messaging.

Thank You for Shopping Locally.

4. Staff members sanitize and wash all touch areas during and after store hours.

6. All protocols from WorkSafe B. C. have been read, understood by all staff.

7. WorkSafe B.C. Safety Plan level 4 in place (where applicable to this industry).

Stay safe. Respect others.
Let’s keep each other Covid -19 free